Aechmophorus occidentalis
Podicipediformes
Grebes are fish-eating diving birds with squat bodies, small heads, and short tails. Their claws are flattened like fingernails, and their toes are lobed rather than webbed. All the world's grebes belong to the same family:
Podicipedidae
Grebes are water-dwelling diving birds with thick, waterproof plumage. They eat fish, aquatic insects, and other small water creatures, and they also eat their own feathers. Grebes are known for their ornate courtship displays, which are among the most elaborate displays of any bird group. During the breeding season they can be found on marshy ponds, where they build floating nests. Both parents tend the cryptically patterned young, which often ride on their backs. In the winter, grebes live on open water. Grebes' legs are set far back on their bodies; this facilitates diving but limits their ability to walk on land.
Common winter west. Fairly common summer east.
Source of Bird Audio

Western Grebes are large and slender with long necks and long, thin bills. Plumage is dark gray above and white below, with a clear color division. The top of the face is black, and the bottom white. The black extends below the eye in the Western Grebe. (In the closely related and similar-appearing Clark's Grebe, the black ends above the eye.) The bill of the Western Grebe is yellowish to dull olive.

In winter Western Grebes are found mostly on saltwater bays. During the breeding season they are found on freshwater wetlands with a mix of open water and emergent vegetation. The breeding areas are located in the central arid steppe and Big Sage/Fescue zones stretching from California north and east to south-central Canada.

Western Grebes are highly gregarious in all seasons, wintering in large flocks and nesting in colonies. The neck structure of Western Grebes allows them to thrust their beaks forward, like spears, a motion they use to catch prey. As a family, grebes are known for their elaborate courtship displays. Western Grebes and the closely related Clark's Grebes perform the most spectacular displays of the family. The displays of Western and Clark's Grebes are almost identical; the only apparent difference is that one of many calls differs in the number of notes.

In all seasons and habitats, the primary food of Western Grebes is fish.

Together, the male and female Western Grebe build a floating nest made of heaps of plant material anchored to emergent vegetation in a shallow area of a marsh. The female lays three to four eggs, and both parents incubate. Once hatched, the young leave the nest almost immediately and ride on the backs of the parents. Both parents feed the young. Young are plain gray and white, not striped like the young of other grebes.

Many birds from the northern part of the population migrate at night to the Pacific Ocean.

At the turn of the 20th Century, tens of thousands of Western and Clark's Grebes were killed for their feathers. With protection, they have recovered and can now be found breeding in new areas not occupied historically. Fluctuating water levels, oil spills, gill nets, and poisons such as rotenone (used to kill carp) are factors that negatively affect the population. When approached by humans, the parents will leave the nest, leaving eggs vulnerable to predation and the elements. Thus, areas frequently disturbed by humans may have low productivity.

Western Grebes can be found during the breeding season on large ponds and reservoirs in the Big Sage/Fescue zones in eastern Washington, especially at Moses Lake and Potholes Reservoir in Grant County. Nesting colonies have also been found near Crab Creek, Frenchman Hills Wasteway, Lake Lenore, and many ponds in the Columbia National Wildlife Refuge, all in Grant County. In Douglas County they can be found at Banks Lake. Non-breeders can be found in the summer in coastal regions of the state as well, such as in Bellingham Bay. In winter Western Grebes are rare in eastern Washington but common on the coast and in Puget Sound. Wintering flocks with birds numbering in the thousands were historically present in Bellingham Bay. Now large numbers of Western Grebes winter at Quartermaster Harbor (Vashon-Maury Island) and Saratoga Passage. There are also a few hundred on Lake Washington and on Elliott Bay. 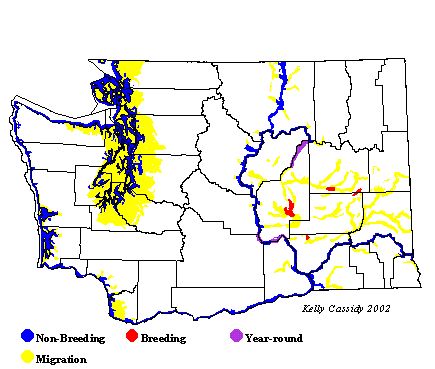