Dumetella carolinensis
Passeriformes
Members of this diverse group make up more than half of the bird species worldwide. Most are small. However their brains are relatively large and their learning abilities are greater than those of most other birds. Passerine birds are divided into two suborders, the suboscines and the oscines. Oscines are capable of more complex song, and are considered the true songbirds. In Washington, the tyrant flycatchers are the only suboscines; the remaining 27 families are oscines.
Mimidae
The Mimids compose a relatively small New World family. Well known for their elaborate vocalizations and mimicry abilities, they often sing repeated phrases within their extended songs. Mimids are medium-sized songbirds with strong legs, long bills, and gray or brown plumage. Many have streaked or spotted breasts. Most forage on the ground, and use their long bills to dig in the soil. They seldom form flocks, and are found in pairs or family groups. They eat a combination of animal and vegetable matter, with more insects and other invertebrates in the diet in the spring and summer, and more nuts and berries in the fall and winter. They usually nest in dense, low shrubs, and both parents help build the nest, incubate, and care for the young.
Fairly common summer resident east.
Source of Bird Audio

In all seasons, Gray Catbirds inhabit dense undergrowth dominated by saplings and shrubs. In Washington, they are found most often along streams, where thick, low growth is common, but they can also be found away from water at edges and in other thicketed areas. Thickets of poplar, red-osier dogwood, wild rose, and willow are all commonly inhabited by Gray Catbirds.

Gray Catbirds often forage on the ground, flipping leaves aside with their bills. When they forage in the shrub layer, they glean food from foliage and twigs. They sing a discordant series of sounds that can be alternately tuneful and rasping. They are named for their mewing call and are receptive to pishing.

Gray Catbirds have a varied diet, but primarily eat insects and other small invertebrates during breeding season, and berries and other fruit the rest of the year. They probably eat more vegetable than animal matter over the course of a year.

Gray Catbirds are monogamous and form pairs shortly after they arrive on the breeding grounds. They nest in dense, broad-leaved thickets and tangles, or low trees. The female builds the nest, perhaps with material brought by the male. The nest is a large, bulky, open cup, typically supported by horizontal branches and made from twigs, weeds, grass, leaves, and bark strips. It is fashioned into three layers ranging from a coarse outer layer to a fine inner layer. The female incubates 3-4 eggs for 12-14 days. Both parents help brood and feed the young, which leave the nest at 8-12 days. The adults continue to feed the fledglings for up to 12 days after they leave the nest. Gray Catbirds often raise two broods a year, and build a new nest for each brood.

While the Breeding Bird Survey has recorded a significant population increase in Washington since 1966, the Washington Gap Analysis Project lists the Gray Catbird as a species-at-risk. Its preference for early-successional habitat helps this species to do well in an increasingly human-altered landscape, as road construction, utility-line placement, and development all create habitat. Intensive agriculture, however, reduces shelterbelts that used to provide prime Gray Catbird habitat, and rapid development along coastal wintering grounds has destroyed former habitat also.

Gray Catbirds are an east-side species. They are most common in major river valleys of far-northeastern Washington, but are present up to the eastern slopes of the Cascades. Gray Catbirds are typically present in Washington from mid-May through early September, but lingering birds have been seen extremely rarely in winter. They can be found in selected thickets along the Yakima River and in tributaries along the Columbia in Kittitas and Yakima Counties. 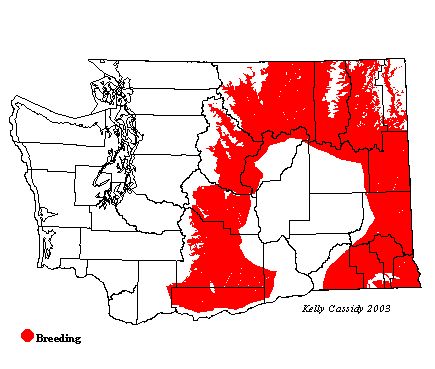