Pelecanus occidentalis
Pelecaniformes
These birds are aquatic, medium-sized to large, and feed on small fish and other animals found in the water. One of their most distinctive features is their feet, which have webbing between all four toes. Many have an unfeathered and sometimes brightly colored pouch of varying size at the throat. Most nest in colonies. Representatives of five of the order's six families have been found in Washington:
Pelecanidae
Pelicans are known for their large, pouched bills, which they use as fishing nets. They are social birds, feeding, flying, and breeding in groups. They are among the heaviest flying birds, the largest species approaching 30 pounds, and many require a running start to get airborne. Heavy flaps interspersed with long glides characterize flight.
Common visitor, warmer months on coast.
Source of Bird Audio

The Brown Pelican is a large bird with a 6˝ foot wingspan. It has an immense bill, and in breeding season its distensible gular (throat) pouch is olive to red. The body is grayish-brown with a blackish belly. Non-breeding adults have white heads and necks; breeding adults have dark chestnut hind-necks and a yellow patch at the base of the fore-neck. Immature Brown Pelicans have dark heads. In flight, the long neck is folded back on the body.

The Brown Pelican is a coastal bird that is rarely found away from the sea. The birds on the Pacific Coast nest on islands off the coasts of southern California and Mexico. After the breeding season, they move north along the coast, frequenting shallow marine areas such as bays, offshore islands, spits, breakwaters, and open sandy beaches.

While foraging, Brown Pelicans dive from 30 feet or more in the air, plunging headfirst into the water to catch fish. If successful, they throw their heads back to swallow prey. Brown Pelicans feed and roost together, and nest in colonies. Groups of Brown Pelicans may be seen flying low over the waves or in loose formation at greater heights. Brown Pelicans are generally silent after fledging.

The Brown Pelican's diet consists almost entirely of fish such as smelt and anchovies. Brown Pelicans also eat some crustaceans and occasionally scavenge or take handouts from fishermen.

Brown Pelicans nest on the ground, on cliffs, or in low trees. The female builds the nest with material gathered by the male. The nest is either a simple scrape lined with a few twigs and feathers or a large stick nest in a tree. The female lays one brood of 2-4 eggs (usually 3) each year. Both parents incubate. The altricial young are fed semi-digested fish by both parents. Young may leave the ground nest after 5 weeks, but young in tree nests remain an additional 2 weeks. After fledging, the young gather in groups, but the parents recognize and continue to feed their own young.

Brown Pelicans disperse from breeding colonies in late summer and move north along the coast. Birds begin to arrive on the Washington coast in June, and their numbers peak in September. The highest numbers in Washington occur during El Nińo years, when food is scarce around their breeding colonies in the south and many birds fail to breed. Their numbers gradually decline in October and early November as birds move south for winter.

Brown Pelicans experienced a large-scale population collapse in the 1950s and '60s because of pesticide contamination. DDT released into the Pacific with agricultural runoff was concentrated in anchovies, causing eggshell thinning in birds that consumed these fish. Since the banning of DDT in 1972, Brown Pelican numbers have increased dramatically along the Pacific Coast. Now low-flying aircraft are the primary disturbance to roosting birds.

Brown Pelicans may be found along the outer coast from June to October. Numbers can be high at the mouth of the Columbia, in Gray's Harbor, at Ocean Shores, and at Copalis National Wildlife Refuge, a collection of coastal islands, rocks, and reefs from Clallam to Grays Harbor County. 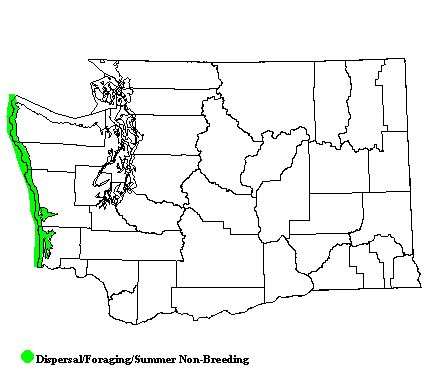