Anthus rubescens
Passeriformes
Members of this diverse group make up more than half of the bird species worldwide. Most are small. However their brains are relatively large and their learning abilities are greater than those of most other birds. Passerine birds are divided into two suborders, the suboscines and the oscines. Oscines are capable of more complex song, and are considered the true songbirds. In Washington, the tyrant flycatchers are the only suboscines; the remaining 27 families are oscines.
Motacillidae
The wagtails and pipits are small to medium-sized open-country ground-dwellers. Pipits are found worldwide, but wagtails are generally restricted to the Old World. Wagtails are often brightly colored with high-contrast patterns, and pipits are typically cryptically colored and patterned. Wagtails are sexually dimorphic: males and females have different plumage. Pipits are generally not sexually dimorphic, that is, males and females look alike. Wagtails and most pipits bob or wag their tails and bob their heads as they walk along the ground. Most are long-distance migrants. They eat primarily insects and other invertebrates, which they take from the ground, but they also eat seeds and fruit. They are monogamous, and both parents help tend the young.
Common migrant. Uncommon winter west, fairly common breeder.
Source of Bird Audio

American Pipits are small, brownish, streaked birds that are sparrow-like in appearance, but with much thinner bills. Males and females look alike. They are slender, with gray-brown backs and buff-colored breasts. During the breeding season, their breasts may be streaked or unstreaked, but outside the breeding season, they are typically more heavily streaked.

American Pipits are open-country birds in all seasons. They breed in alpine areas, near seeps, streams, lakes, or wet meadows. During migration and winter, they come down into the lowlands and can be found on beaches, marshes, agricultural fields, short-grass prairies, and mudflats.

American Pipits walk or run along the ground and forage in flocks outside the breeding season. They wag their tails up and down and are easily identified by the double call-note given in flight. When flushed, they fly up, circle around, and come back down to the ground, descending in a stair-step pattern.

American Pipits are monogamous, and pairs may form during migration or on the wintering grounds. They nest on the ground, usually in a sheltered spot, tucked under overhanging grass, a rock ledge, or other object. The female builds a cup-nest out of grass, sedge, and weeds, and lines it with finer grass, feathers, or hair. She incubates 3-7 eggs for about 14 days while the male brings her food. The female broods the young for the first 4-5 days, and the male continues to bring food for the female and the chicks. After brooding, the female joins in feeding the chicks. The young leave the nest after about two weeks, but stay close and are fed by both adults for another two weeks, after which they join loose flocks of other immature birds.

American Pipits are highly migratory and travel during the day in loose, straggling flocks. Fall migration begins in mid-September through October, when weather begins to deteriorate on the Arctic breeding grounds. American Pipits winter throughout the southern United States south to the tip of Central America. Birds return to the Arctic in the spring, with the peak migration occurring from late March through early May.

While there is some suggestion of declining numbers, American Pipits are currently widespread and common. Global warming may allow these birds to winter farther north than previously, but it also may reduce and fragment existing breeding areas. Forest clearing has probably increased American Pipit migration and wintering habitat, but the draining and destruction of wetlands and livestock grazing have had negative impacts on these habitats.

American Pipits are present in Washington as breeders, migrants, and wintering birds. They are common breeders at high elevations in the Olympics and North Cascades, and at major volcanic mountains in the southern Cascades. In the Olympics, they are most common in the wetter, western alpine areas. They are common from Mount Baker to Harts Pass (Whatcom County), and on Mount Adams, Mount Rainier, and Mount St. Helens. They are common migrants in open habitats throughout the state from mid-April to early May, and then again from early September to mid-November. Small numbers winter in western Washington, and can be found in fallow fields or open, disturbed areas, and on beaches. A few wintering birds can rarely be found in the river valleys and lake basins of eastern Washington. 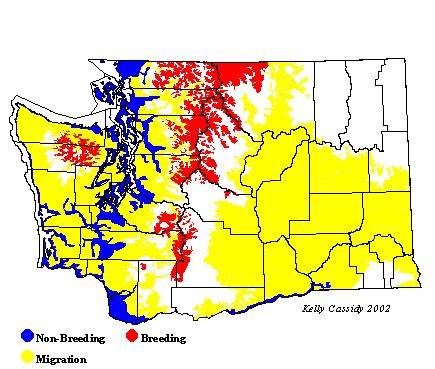