Tringa flavipes
Charadriiformes
This is a large and highly varied group of birds that do not have many outward similarities. Most are water birds that feed on invertebrates or small aquatic creatures. The order is well represented in Washington, with seven families:
Scolopacidae
This large and diverse family of shorebirds is made up mostly of northern breeders that migrate long distances. Their highly migratory nature leads them astray fairly frequently, and rarities often show up outside their normal range. Many of these mostly coastal birds forage in relation to the tides, rather than the time of day. They use a variety of foraging techniques, but the most common techniques are picking food from the ground or water, or probing into wet sand or mud. Those that probe generally have sensitive bills that open at the tips. Most members of this group eat small invertebrates. Many make dramatic, aerial display-flights during courtship. Nesting practices vary, but both parents typically help raise the young. Clutch size is usually four, and both parents generally incubate. The young are precocial and leave the nest within a day of the hatching of the last chick. Most feed themselves, although the parents generally tend the young for a varying period of time. The female typically abandons the group first, leaving the male to care for the young until they are independent.
Common migrant. Rare winter west.
Source of Bird Audio

Lesser Yellowlegs breed in open boreal woods in the far north. They often use large clearings or burned areas near ponds, and will nest as far north as the southern tundra. During migration and winter, they occur on coasts, in marshes, on mudflats, and lakeshores. In comparison to Greater Yellowlegs, Lessers are typically found in more protected areas, on smaller ponds. They are less common on extensive mudflats than Greater Yellowlegs. When nesting, they generally use drier, more sheltered sites than their larger counterparts.

Lesser Yellowlegs typically occur in tighter and larger flocks than do Greaters, both in flight and while feeding. Like the Greater Yellowlegs, Lessers forage in shallow water outside the breeding season, picking at prey on or just below the water's surface. They are less likely than Greaters to run after their prey, but more likely to scythe their bills back and forth in the water stirring up prey like an avocet. They are typically more approachable than the wary Greater Yellowlegs. They bob the front half of their bodies up and down, a characteristic behavior of this genus. The most common vocalization heard is a two-note flight call.

During the breeding season, insects make up the majority of the diet. The rest of the year, Lesser Yellowlegs also eat small fish and crustaceans.

Lesser Yellowlegs nest in loose colonies. They first breed at one to two years of age. They form monogamous pair bonds, but typically pair with a different mate each year. The nest is located on the ground in a dry spot, usually near water, but sometimes quite far away. The nest is usually well hidden in a densely vegetated area, next to a mossy hummock, fallen branch, or log. It is usually a shallow depression lined with moss, twigs, leaves, grass, and needles. Both parents share incubation duties, and the 4 eggs hatch in 22-23 days. The young leave the nest soon after hatching and feed themselves. Both parents tend and aggressively defend the young. The female usually leaves about 11 days after the young hatch, while the male stays with the chicks until they can fly, about 23-31 days. Pairs raise only one brood per season.

Lesser Yellowlegs are long-distance migrants and follow the classic shorebird migration pattern of traveling north concentrated in the interior of North America, and traveling south spread across the continent. They return to the same general breeding area in successive years and migrate to the southernmost coasts of the US south to South America. The Lesser Yellowlegs is one of the earliest fall migrants, showing up by June.

Lesser Yellowlegs were hunted heavily until the Migratory Bird Treaty Act of 1918 banned their hunting. Observers have speculated that the population has recovered since the act took effect, but a lack of information on historical and current population size makes this claim hard to substantiate. Breeding Bird Survey data indicate that there have been significant decreases in numbers between 1980 and 1996, although these numbers come from a small sample size and may not represent the entire population. The International Shorebird Survey (1972-1983) suggests that there has been no significant trend in number of fall migrants at 43 stopover sites along the Atlantic. Christmas Bird Counts indicate that the wintering population in the United States is on the increase. The consensus today is that the population is currently stable, and the Canadian government estimates it at half a million birds.

This species migrates through Washington on both its northward and southward trips, but is most common from mid-July through September. Most of the birds in Washington in July are adults, and the juveniles follow from late July into early October. Lesser Yellowlegs are fairly uncommon after the middle of October. They can be found along the coast and in a variety of wetland habitats throughout Washington's lowlands. In spring, they are uncommon migrants in eastern Washington from mid-April to mid-May, where they are found in freshwater wetlands. 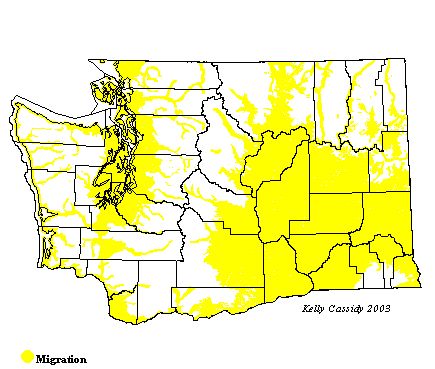