Larus glaucescens
Charadriiformes
This is a large and highly varied group of birds that do not have many outward similarities. Most are water birds that feed on invertebrates or small aquatic creatures. The order is well represented in Washington, with seven families:
Laridae
The family Laridae is made up of birds closely associated with water. Distributed throughout the world, representatives of this family nest on every continent, including Antarctica. Most are long-lived birds, many of which do not breed until they are three or four years old. Most are colony nesters and nest on the ground. Clutch size is generally small, varying from one to four eggs. Both parents incubate the eggs and help feed the young. The young typically hatch covered with down and stay in the nest for a few days, after which they leave the nest but stay nearby. Most, especially in Washington, raise a single brood a year. This group is known for its elaborate displays in the air and on the ground.

The Washington representatives of this family can be split into two groups, or subfamilies. The adaptable gulls are the most familiar. Sociable in all seasons, they are mainly coastal, but a number of species also nest inland. Many—but not all—are found around people. Gulls have highly variable foraging techniques and diets. Terns forage in flight, swooping to catch fish or insects. They dive headfirst into the water for fish. Although they are likely to be near water, they spend less time swimming than gulls.
Common resident west. Uncommon east.
Source of Bird Audio

The typical large gull of the Pacific Northwest, the Glaucous-winged Gull frequently hybridizes with other gulls and often displays intermediate plumage characteristics. During the non-breeding season, the adult Glaucous-winged Gull has a solid gray-blue mantle (back and wings), a white tail, and a white head streaked with brown. The bill is very large. The wingtips are gray or gray-black, not deep black like many gull species. The underwings are white with a band of blue-gray. The legs are pink, and the beak is yellow with a red spot. The eye is dark brown, or rarely yellowish. During the breeding season, the head is pure white, and the eye has a fleshy pink eye-ring. Like the other large gulls in Washington, the Glaucous-winged Gull is a 'four-year gull,' in that it takes four years to reach adult plumage. The juvenile is mottled brown with a dark eye and bill. This plumage varies and takes on more of the characteristics of adult plumage in each successive year. Identification of these gulls can be confusing, thus an advanced field guide and assistance from an experienced observer are highly beneficial for descriptions of hybrids and identification of gulls.

Glaucous-winged Gulls are commonly found in bays and estuaries, and on beaches and rocky shorelines. They also frequent freshwater lakes, agricultural fields, cities, and garbage dumps in coastal areas. They are sometimes found far offshore, well out of sight of land, but are less common far inland. Nesting habitat is mainly low, flat islands, with sandy, rocky, or gravel substrates. Building roofs in cities along Puget Sound have also been used as nesting habitat. Nests within Puget Sound are usually located in human-altered habitats, while nests along the coast are typically in natural settings.

Glaucous-winged Gulls forage in a variety of styles--while walking, flying, or swimming. Like other large gulls, they have been observed dropping shellfish onto rocks and other hard surfaces from far above in order to crack them open. They steal food from other seabirds and prey on young birds, especially those nesting nearby. Very bold, they will approach picnic tables and other human-occupied areas, scavenging and looking for handouts.

Omnivores, Glaucous-winged Gulls will eat most anything, but items most often ingested include fish and other marine creatures, small birds, eggs, small mammals, invertebrates from waterlogged fields, and refuse from dumps, sewage ponds, trash cans, and parking lots.

Glaucous-winged Gulls breed all along the coast of Washington (and less commonly in eastern Washington) in monogamous pairs that typically last for multiple breeding seasons. Nesting is usually in colonies, and birds first breed at four years of age. Nests are usually on the ground. The spot is scraped clean, and a ring of vegetation and nearby debris is built up. Sometimes more than one nest is started, but only one is completed and used. Both parents incubate the 2-3 eggs for about four weeks. Newborn chicks are covered in down and may leave the nest as soon as two days post-hatching, although they stay near the nest. Both parents feed the young, which first begin to fly at 5-7 weeks old, and leave the colony about 2 weeks afterwards.

In Washington, the Glaucous-winged Gull is present year round, although the young birds disperse farther than older birds after the breeding season. Some birds breeding in British Columbia and Alaska disperse southward along the coast in the winter.

The largest breeding colonies in the state are at Protection, Tatoosh, and Carroll Islands in Clallam County, Gunpowder Island in Pacific County, East Sand Island in the Columbia River estuary, Colville, Smith, and Minor Islands in San Juan County, and Destruction Island in Jefferson County. 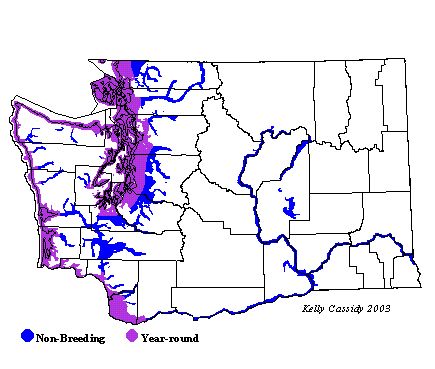